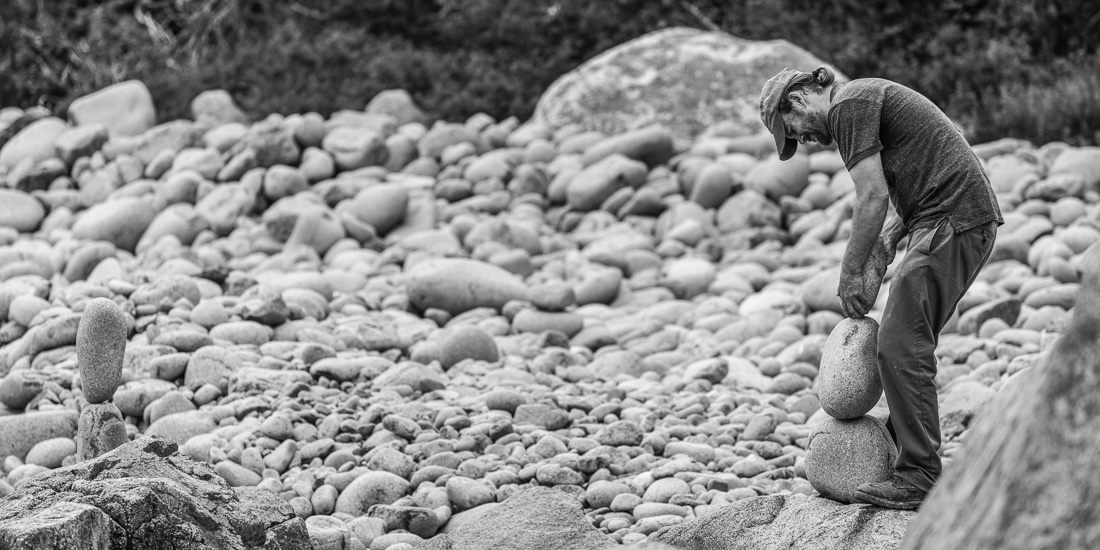 This guy was building rock towers on a beach in Maine last summer. There are definitely some parallels to be applied to building developing skills and looking for a job.

As I’ve been applying for more and more jobs in the past few weeks I’ve noticed a few things recurring. One of those things is that a number of people have written me back saying something along the lines of this…

“At this time we are not able to hire junior level developers. Thanks for applying, we will keep your resume on record and let you know if anything changes in the coming months…”

While this is definitely not what I was looking to hear when I applied for the job I totally understand.

At any rate, I decided to change what I did with those kind of emails. For the first number of them I would just push them to the side, mark that company off of my “resume and cover letter sent – waiting for reply” list and move on… Instead I decided to try a few things and just see what would happen.

I started writing emails back to them. No, not the kind where I begged for them to reconsider because they must have overlooked some piece of my qualification, but rather a simple, short email asking for advice for someone in my position. They had already told me that they couldn’t hire me, there is nothing to be gained by just moving their name off of my list… why not see if they have any great advice.

Well, here is what started to happen.

I started getting emails back from them. No, not that they were second guessing their decision to not hire a junior developer, instead with a couple nuggets of wisdom that I’ve been working to apply to my development skills going forward.

Build Something For Yourself

The first bit of advice I’ve received is to continue to build stuff for myself. It’s so easy to not write code during this time of my life. Who knew that job hunting and applying for the jobs I found could be a full time job?

The easy thing to do is to just forget about coding and rest on what I do know, hoping that everything will come back to me when I get a job. However that probably isn’t the best approach in the world. This time “in between” is a good time to brush up on some stuff that I didn’t quite understand or explore new territory.

To that end, the last few days I’ve been wading through a couple of Java tutorials and Grails tutorials… in this case it was more because a couple of jobs mentioned that they would like experience with Java/Grails/Spring, but the result is similar. I’m applying the knowledge that I do have in object oriented programming to a different set of syntax. There is definitely a learning curve but its also made me realize that with some exposure to new languages/frameworks I can learn just about anything.

Work on an Open Source Project

This second bit of advice is something that I’ve shied away from because I tend to feel a bit inadequate when it comes to looking at someones code and telling them how they should have written it. It is probably impostor syndrome… but its a bit terrifying to submit a pull request to a project knowing that someone who has been programming longer than I have is going to look at it and critique it.

However… a couple days ago I did fix a small problem on an open source project that I talked about the other day, Harrys prelaunchr. Definitely nothing earth shattering – a couple simple syntax errors in an email view that showed up during the open sourcing of the project.

There definitely was a bit of a rush when I got the email saying that my pull request had been merged into the project! Even though it wasn’t much, it was my first step into the world of contributing to open source projects.

I definitely want to pursue more of this kind of thing in the future. One way of contributing that I heard about in a podcast the other day is in providing or updating documentation. Definitely something that would be a good way to get your feet wet.

Going forward the majority of my time will continue to be focused on finding and applying for jobs… however I do really want to pursue both of these pieces of advice.

That my friends is where I’m at. I hope you’re having a great day and considering writing some code! 🙂